Welcome to the Dawg House

Welcome to the Dawg House

Country music’s Brantley Gilbert sings a lot of songs about letting loose on a weekend night in a small town that should be listened to loud. So, when the pandemic kept him at home, he got bored. Gilbert had been dreaming of turning his garage into a man cave, so he called on his “boys” (friends and bandmates) to help him with a garage renovation, and man did they “Fire’t Up!” They covered every inch of his garage and man cave with RaceDeck flooring. “I just love the design, how light bounces off of it,” says Gilbert about the Free-Flow® RaceDeck garage floor he installed.

The garage houses his trucks, off-road toys, motorcycles (his “babies”), and even his tour bus. But wait – there’s more! The country star and the boys also installed RaceDeck wood-style flooring (with the same simple snap-in features) in what he says is “the man cave/showroom/anything you can think of.” There’s space there for bunk beds, a writing room, a back patio with an overlook to a dance floor – and every amazing inch is beautifully covered in RaceDeck’s wood look modular flooring.

The RaceDeck custom garage flooring is the dream Gilbert had before he became successful, and there’s a reason he used it for his cars, bikes, off-road toys, and tour bus. “This stuff has an 80,000-pound test, and it is tough. When you bring these guys in here nasty and dirty, you can drag a pressure hose right in and clean off the mud. We installed three drains on each side. We even wash the tour bus right here.” 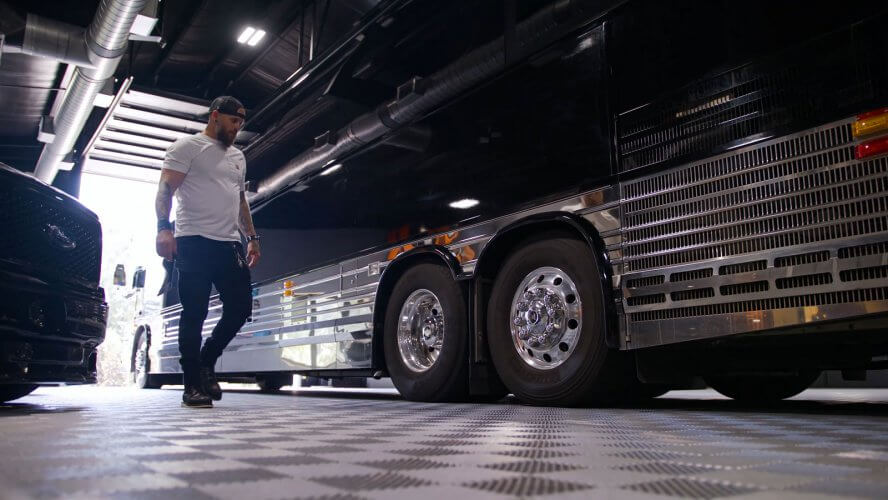 Then there is Gilbert’s collection of toys and vehicles. Check out the 1968 Mercury Cougar he brought back to life (and yes, the lyric about when he “gets the cover off the ‘68” in his famous song, “My Kind of Party,” is about this white Mercury Cougar). Stray dogs and cats once lived in it, but he’s turned it into a hot rod. Jeff Lee helped with the motor.

A self-professed “Ford truck guy,” Gilbert also has a 2018 Ford SpeedKore Edition F-150 that looks good and “she’s fast.” When they unveiled it to him, it blew his mind. “This is probably the fun-nest vehicle I’ve ever driven in my life.” He also has a 2017 Ford F250 Super Duty 4×4 (Lifted) built by Rocky Ridge. Then there are the toys: A Polaris RZR, four side-by-sides, and several four-wheelers.

But his real “babies” are his motorcycles. A major enthusiast, Gilbert shows off his  “babies,” including a 1999 Harley Davidson Softtail Custom, which they take out on the road because it’s part of his show. Next up is a 2006 Harley Davidson Road King, his newest and oldest bike all at the same time, which he bought to tear down and loved so much “she stayed exactly like she was.” Then there’s a Fatbackers Incorporated 2013 Harley Davidson Street Glide that’s big and blocky and built to the gills. Last but not least, there’s Gilbert’s 2018 Harley Davidson Road Glide that’s his trip bike. He also has some drift trikes and minis.

When he’s not riding or touring, one of Gilbert’s favorite places at the Dawg House is the bar. With big hits like “Bottom’s Up,” that’s not hard to imagine, except the musician recently celebrated nine years of sobriety. “It’s where everyone else drinks, but I always end up playing bartender,” says Gilbert. “And if you get bit,” he adds, “this is where you wake up in the morning.”

You might be asking, what do you name such a vast, envy-inducing space? Gilbert dubbed it the “Dawg House” – a nod to Gilbert’s beloved Georgia Bulldogs. And if you think there’s more to the name than his favorite sports teams, you’re probably right. “I thought the Dawg House was a cool name,” Gilbert told People magazine in an exclusive interview, “But also some of the guys will say, ‘Well, if you do screw up and get kicked out of the house for a minute…’” he jokes. “In the South, we call that ‘getting put in the doghouse, so now there is an actual Dawg House where they can come stay.”

We doubt Gilbert’s in the actual doghouse often. Read any critique of Gilbert’s music you’re likely to hear about songs not just about having a good time, but those that reveal a man who cares about the people in his life. His space is a great place for friends and family to unwind, and when they realized his kids also need play space of their own, he built a special treehouse. “It’s got a boy’s side and a girl’s side,” the singer says, “and it’s right beside the Dawg House. So that’s their Dawg House.” We’re pretty sure it has RaceDeck flooring, too.

Inspired to create your own awesome garage?

For any questions you have about RaceDeck’s next level flooring, call