In most homes, the garage is not the most impressive room in the house. This is not the case for a RaceDeck Garage. Not only are they the coolest garages on the block™, but most are the coolest rooms in the house. Guðmundur Árni Pálsson and Maríu Höbbý of Iceland, have taken their garage to the next level.

Guðmundur and Maríu’s garage is probably the largest one in Iceland: “Upstairs is a double garage and you can move a vehicle with a car lift down to the basement, which is about 492 sqft,” says Guðmundur. “The basement is broken up by load-bearing walls so I can’t use it all for cars, but it still accommodates two cars downstairs and two upstairs, plus I have a motorcycle, pool table, dartboard, and a huge TV. Our boys and their friends are diligent in using the pool and TV facilities.”

Guðmundur who works as a mason, has worked hard to create a modern showroom for their vehicles. Thus, all the walls are tiled and the floors are elaborate RaceDeck Garage Floor designs. Then the walls are decorated with spare parts, photographs, and posters.

The elevator in the garage is then quite unique, custom-made by Gudmundur’s business partner, a steelmaker. “I got a shipyard to draw it for me and then it was assembled from laser-cut parts,” says Gudmundur, noting that the design is well thought out and can be used, among other things, as a pit for work under a chassis. “In addition to a lift it is a lid that is open over the floor so that it can be used either in the top position or the lower position, and hydraulic cylinders are used to move both the lid and the lift.” It takes just over two minutes to move a vehicle from the basement up into the garage itself and the equipment is simple to handle, according to Guðmundur.

Before children, Guðmundur and Maríu would often ride a motorcycle around Iceland. Today, when the weather is good in the summer, they are more likely to start out with a caravan in the tow. At home, there are two classic Ford Mustangs, a Chevrolet Camaro, a Porsche, and many motorcycles.

“I owned the Camaro a long time ago and drove it for seven or eight years and then sold it. After a while, the Camaro came back on the market, so I bought it back,” says Gudmundur. Before that, Guðmundur has made up a collection of the 1969 Ford Mustang. As well as collecting the cars he has a hobby of repairing old motorcycles.

Guðmundur says that during those times of quieter work, it is good to be able to get to the garage exactly as it was left and continue projects from where they were. There is no risk of the garage and workspace being filled with garbage. “When I finish working on one motorcycle, I start on another. Then there’s the old Mustang that has kept me going. When I got it three years ago it was in parts.”

It is nice that the interest in cars and motorcycles seems to have been passed on to Gudmundur and Maríu’s boys. “When their friends come to visit, the boys like to show them the garage, but they still look more at the cars than anything else. Having grown up in this environment is no doubt that they think cool cars are a normal thing and maybe not so exciting. I, on the other hand, got interested in cars and motorcycles young when I was growing up in the Westman Islands and the interest has only increased with age.”

Design your Next Level Garage

For any questions you have about RaceDeck’s next level flooring, call 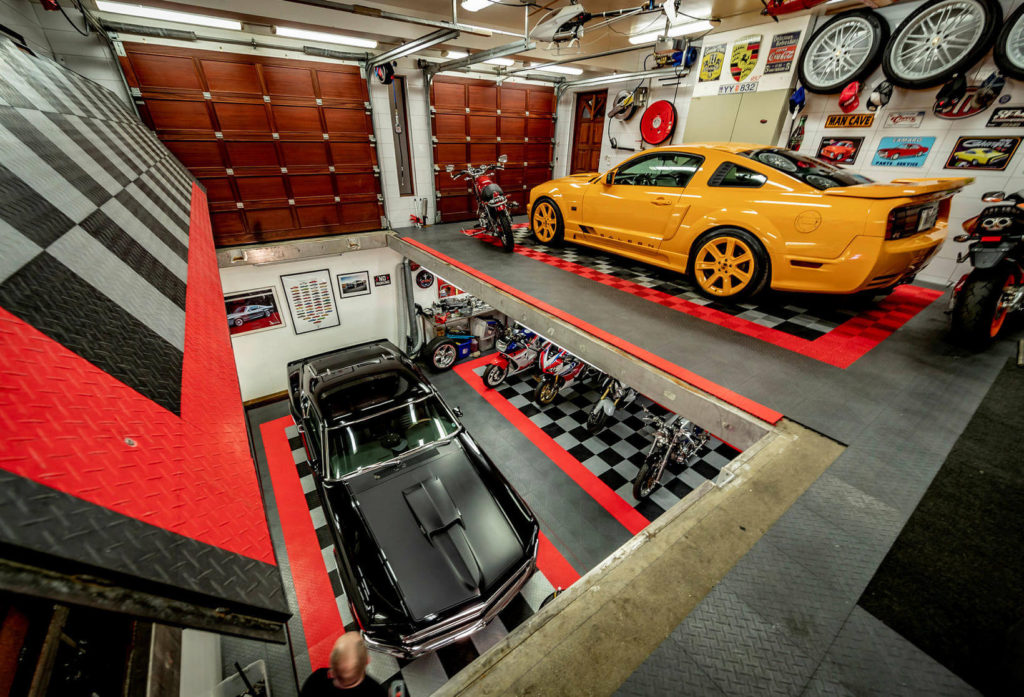 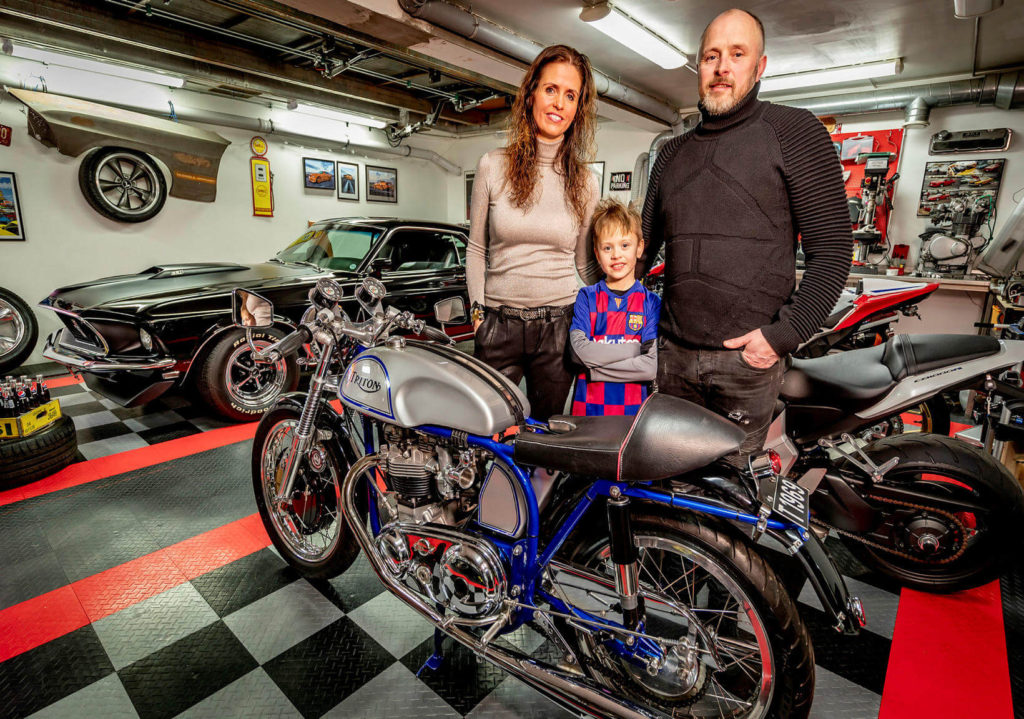 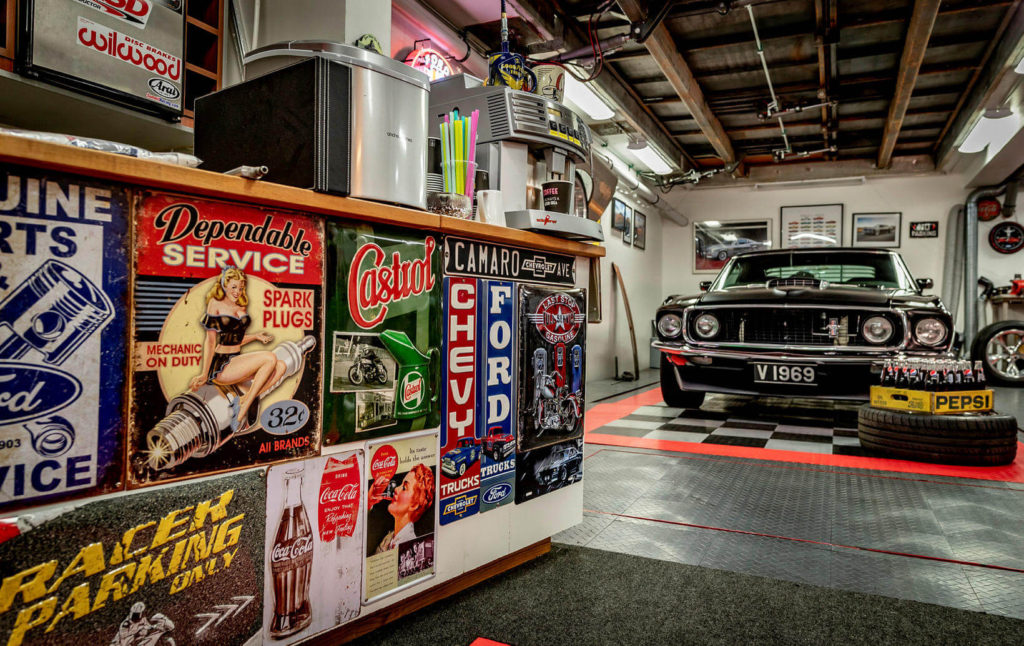 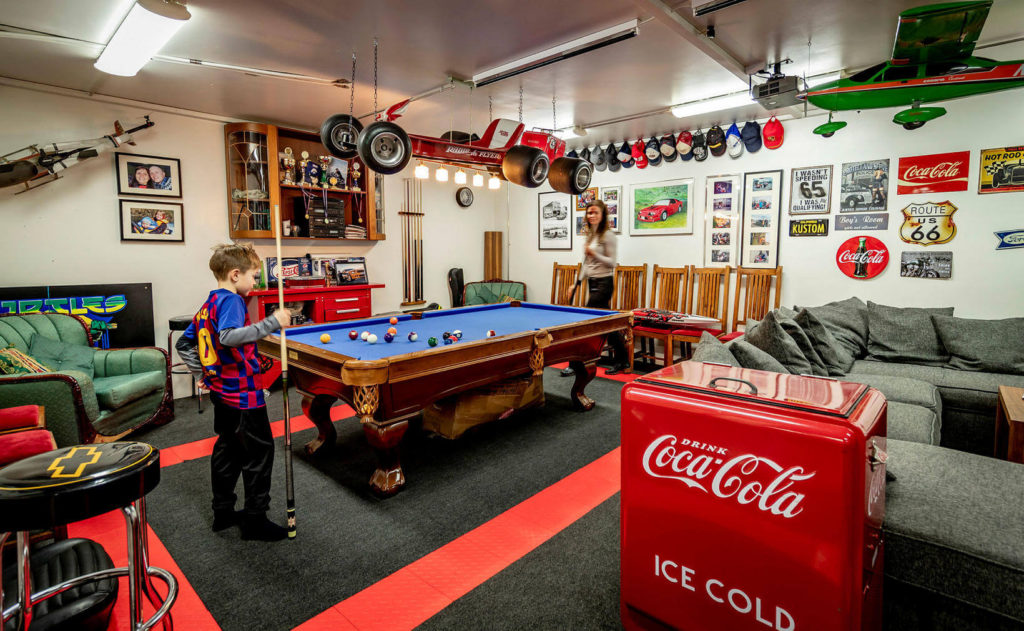 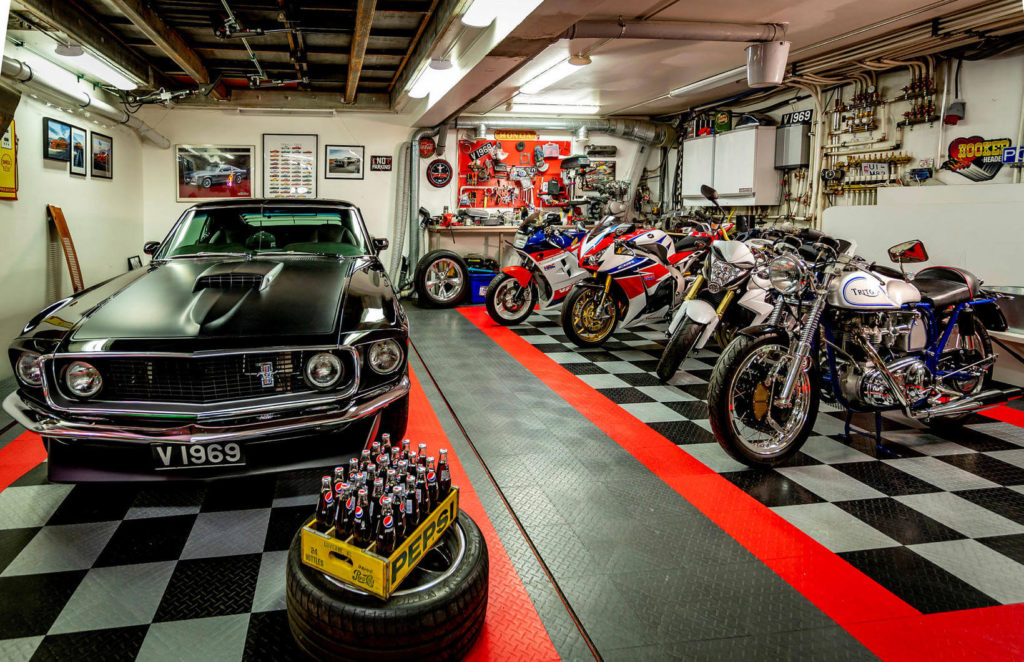 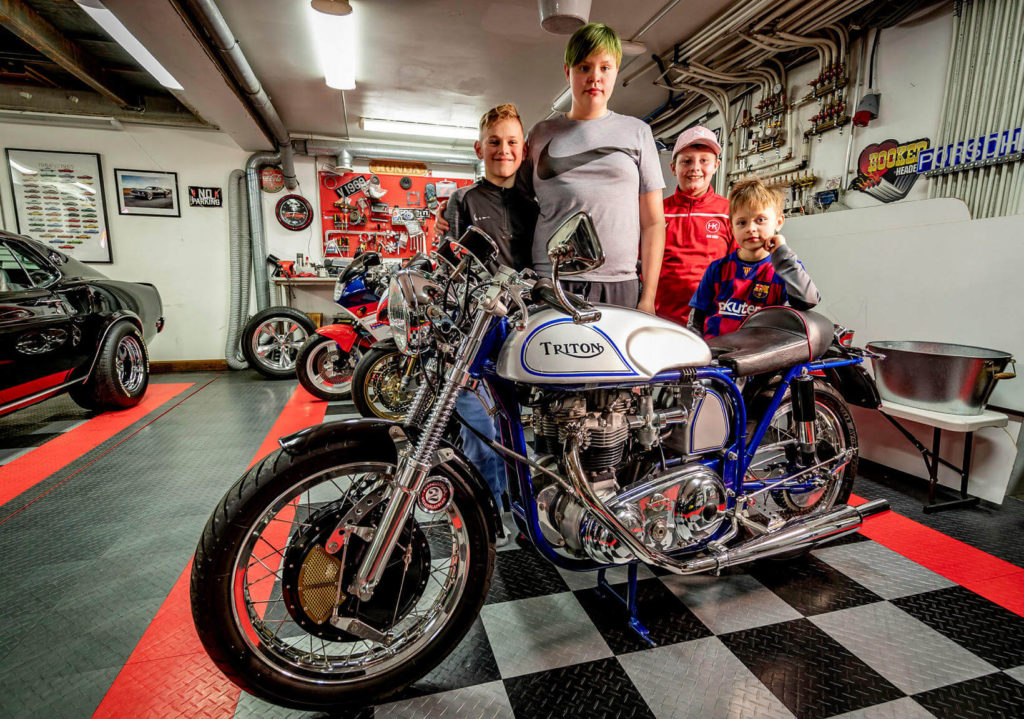 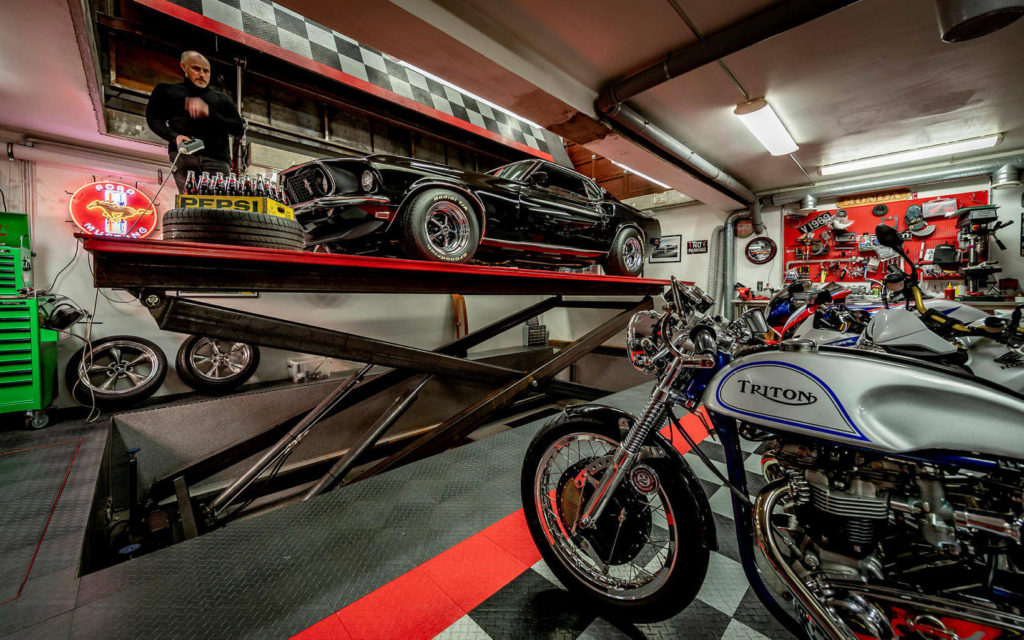 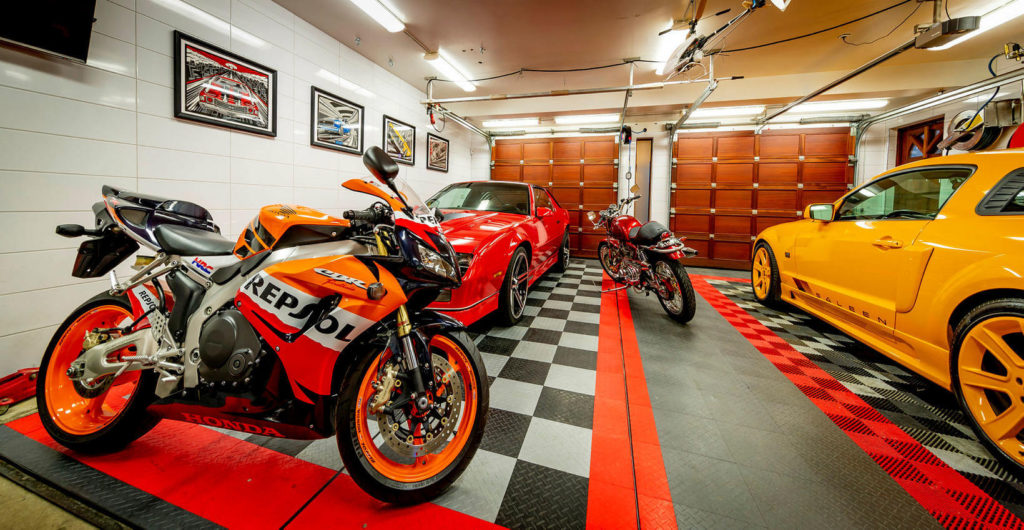 If you know Icelandic you can read the original article on mbl.is.